What To Expect From The Quarterback Moves

What has just ended as the year of the backup quarterback has now seen a plethora of starting quarterbacks hit the free agent market. Some haven’t found homes quite yet, but those who have are positioned to make a fantasy impact and improve the weapons around them. As the players are set to start a new journey with a new team, the country is under extreme caution caused by the COVID-19 scare. So what does this mean for the free agents recently signed? For starters the players could not travel and meet with representatives or coaches, they could not tour the facilities or have face to face meetings. Most importantly they will not be able to get acclimated with teammates, especially the quarterback/wide receiver relationships depending on the length of the national emergency. We could potentially see a start date of training camp as the first time the groups would be able to work together. Knowing this, what can we take away from the new free agent acquisitions? Let’s break down some stats we do know and how they will benefit the talent around the quarterback this upcoming season especially at the tight end position.

A massive $25 million deal lands Rivers with the Colts, but it’s only for one year. Rivers will come in and replace Jacoby Brissett under center while trying to lead the Colts to the promised land in 2020. Rivers has a decorated, resume holding 30 franchise records in all and continues to climb the ranks of the all-time record books. The one that stands out the most is his consecutive starts streak at 224, making him the active leader in the NFL. The Colts need a leader to take over that locker room and generate some on field attitude which Rivers definitely brings to the table. There is a lot of talent around Rivers as the Colts head into the NFL draft.

With this said, Rivers has a number of weapons at his disposal. Marlon Mack is an underrated running back who is only 24 years old and has averaged 1,000 rushing yards over the last two seasons. In his 3 year tenure with the Colts, Mack has caught 52 passes out of the backfield. As it stands, Nyheim Hines will continue to handle third downs, but Mack should see an uptick in targets with the style of play Rivers brings to this offense. This past year in Los Angeles Melvin Gordon and Austin Ekeler combined for 134 receptions out of the back field. The play calling will differ from Los Angeles to Indianapolis, but the natural play style of Rivers should raise the floor for Marlon Mack and increase his receptions making him a sneaky running back play this year. Tight end Jack Doyle should also benefit tremendously from Rivers.With Eric Ebron moving on to Pittsburgh, Doyle should see the vast majority of targets coming to the tight end position. Rivers has supported a top 12 fantasy tight end in 12 of 14 seasons with a TE13 in 2017 and a TE28 in 2018.  With work to still be done at wide receiver, look for Indianapolis to add receiver help via the draft during Rivers’s one year deal. 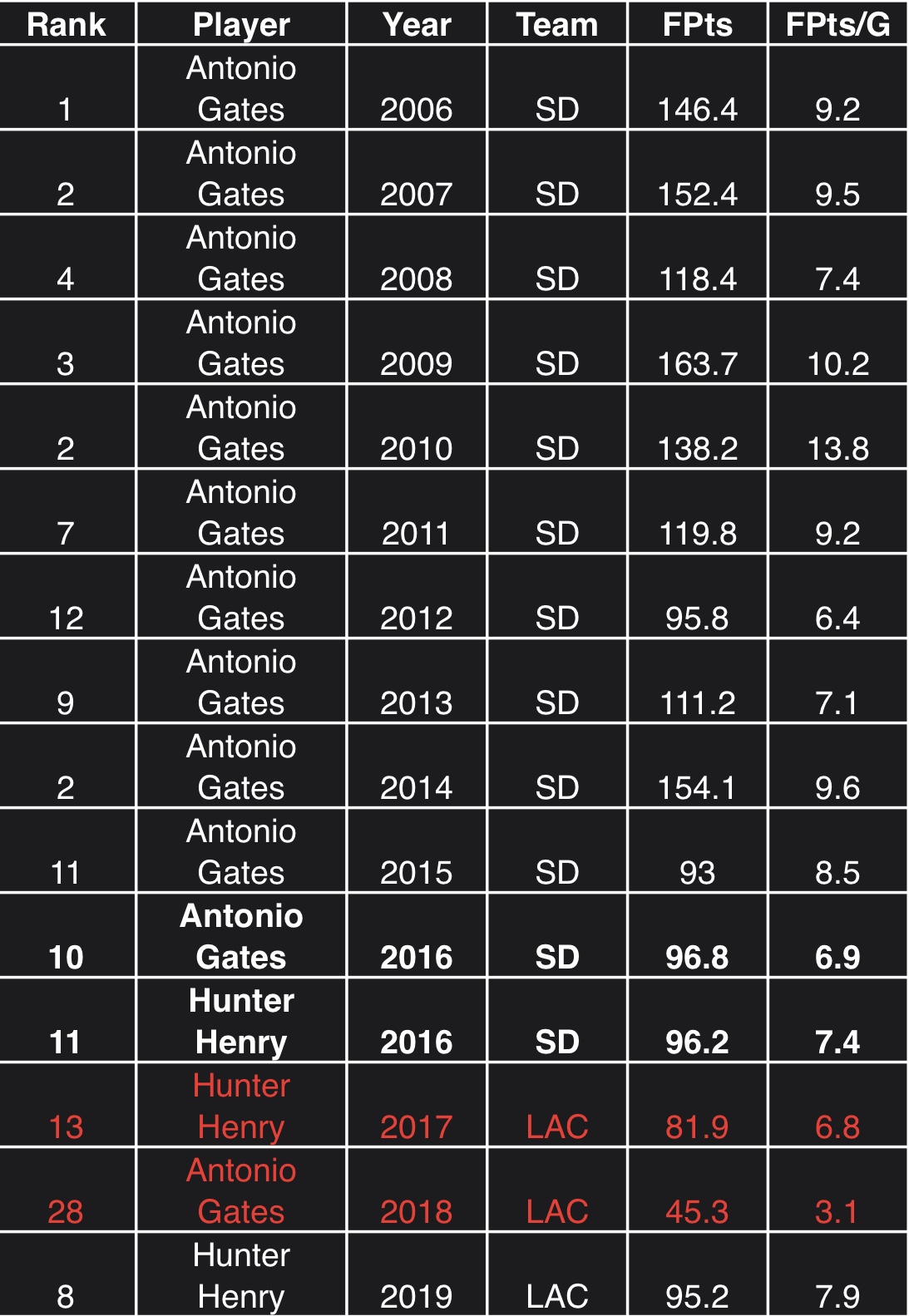 The end of a 20-year run in New England for one of the most accomplished quarterbacks to play the game is now official. Brady takes his talents to Tampa Bay and teams up with Bruce Arians and Byron Leftwich. The most critical change in scenery at quarterback is Brady and the Buccaneers. A whirlwind difference in every aspect of the game between Winston’s air it out and score on every play versus Brady’s game management. With the pandemic scare and travel bans this one will see the most impact. With a natural regression coming from Evans and Godwin, the production should stay the same: all of those arrant passes and interceptions will be no longer, leaving more accurate and on time passes for the group to do damage with. Chemistry is going to be key for this receiver corps and the sooner they can start practicing the more dangerous they are going to be. A key question mark to this offseason move is going to be O.J. Howard. Is this the year we finally see production out of Howard or has he become wasted talent in Tampa Bay? Lastly, Tampa Bay has passed on Melvin Gordon and Todd Gurley, two of the bigger names that hit free agency. For now it looks like they are happy moving forward with Ronald Jones. If this is the case come season start Jones should benefit from the signing of Brady. Brady is a game manager, and although he will have great receivers to work with he wants to win the game more than pad his own stats. Those goal line fades now turn into handoffs up the middle. Another running back that could double in production this year with Brady under center. With 31 receptions and over 1000 total yards from scrimmage, Jones put up a very quiet yet productive year. He turns 22 years old this year and remains a high dynasty target.

Matt Rhule and Joe Brady wanted Bridgewater to come in and take over for Cam Newton. A total rebuild in Carolina lands Bridgewater a huge deal to become the next quarterback to wear blue and silver. The system Brady ran at LSU is about quick passes and stretching the defense horizontally; when Bridgewater took over in New Orleans when Brees was injured he showed he could do both. At times he was hitting tight windows but he was also underthrowing wide open receivers. Bridgewater shows the talent to run an offense like Brady is going to expect, the question is who will be most impacted by this up tempo play calling style? Both wide receivers in this system should benefit from quicker passes and faster play in general. Curtis Samuel was 9th in air yards last season with average play at best from the quarterback. With the addition of Robby Anderson, Samuel should roam the middle of the field. It’s not the deep ball or boom plays that had me leaning towards Samuel, but the intermediate passes he will see with quick release from Bridgewater. When working the intermediate third last season, Bridgewater showed great accuracy and consistency placing the ball where only his receivers can make a play. While throwing against zone Bridgewater showed poise in the pocket and touch to allow his receivers to catch and turn upfield. If this trend continues into the 2020 season, look for Samuel to use his 4.31 speed and outrun the defense on multiple occasions. Greg Olsen’s target share is now open and the 6’ 4” 260 lbs tight end by the name of Ian Thomas finally gets his chance to be the full time starter with a quarterback who targets the tight end. Entering his third season and primed for his break out, Thomas has excelled when he was on the field without Greg Olsen. Opportunity knocked and Thomas answered. The chart below shows the production is tripled with Greg Olsen off the field. To be a top 12 fantasy tight end you only need to average 9.1 FPts/G and that’s just what Thomas did. 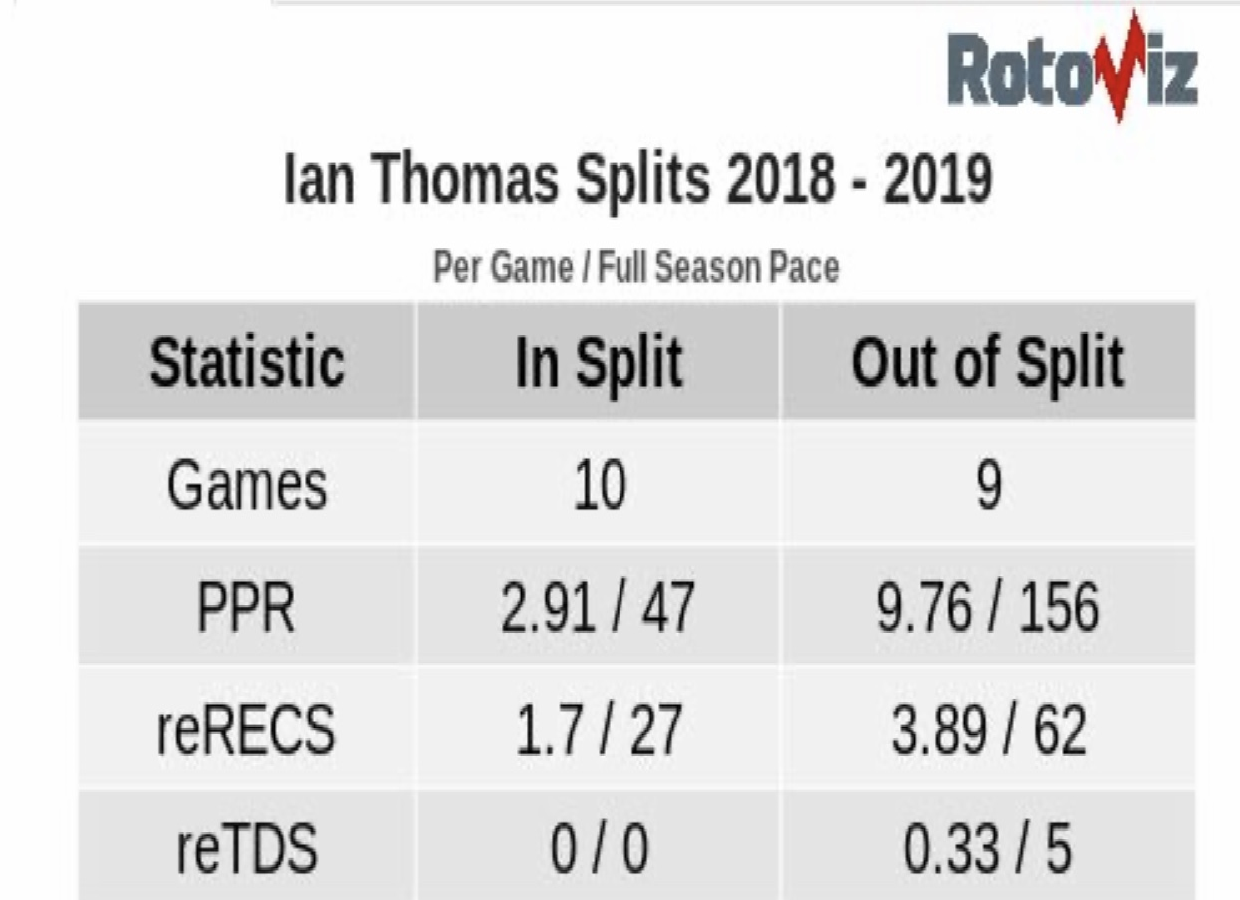 You can find more of my work at dynastyhappyhour.com or tune into Sideline Squib Podcast anywhere you get your podcasts!