The Star in Dallas

As the owner of the Dallas Cowboys, Jerry Jones has one wish every night when he looks up at the stars. It's not Dak Prescott accepting a small contract or winning a Super Bowl in 2020. What Jerry Jones really wants more than all else is for the Cowboys’ rookie wide receiver CeeDee Lamb to become a superstar.

Jones’s ego is well documented. The owner of “America’s Team” has engineered his organization to be one of the flashiest and most noticed in the league. From firing Tom Landry to winning three Super Bowls Jones has earned praise and criticism while acting as the Cowboy’s general manager and being the face of the franchise. One of his biggest feats was earning the term “One for the Thumb”, a rallying cry for the Pittsburgh Steelers in 1981 to win their elusive fifth Super Bowl. Jones has plenty of prized memories and accomplishments throughout his tenure and his three Super Bowls, but do they mean more to him and Cowboy fans than the number 88? 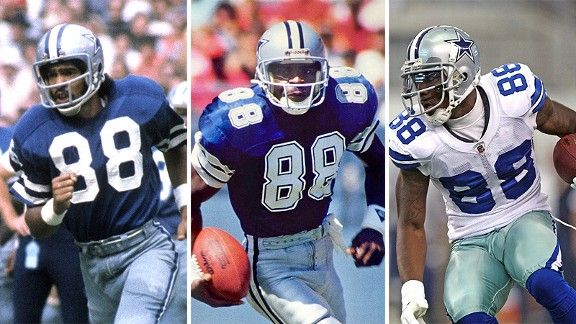 Most of us are aware that Cowboys’ greats Drew Pearson, Michael Irvin, and Dez Bryant all donned the number 88, contrary to most teams’ methods. Typically, when a player accomplished great things for an organization, that number gets retired from said organization. 88 for the Cowboys means a little something different. The player asked to wear it is believed to be a generational talent and the next superstar at the wide receiver position. This is unusual because it puts a surreal amount of pressure on a rookie player that hasn’t seen a snap in the NFL. It essentially says, “We expect you to get to the Hall of Fame”.  For Jones, it's even more than that. Jones’s first encounter with the number 88 came during college in the 1960’s with his lifetime best friend, teammate, and confidant, Jerry Lamb.

As Ceedee Lamb fell down the 2020 NFL Draft and landed in the Cowboys lap at 17th overall, Jones knew what he had to do. Even with other significant needs on this roster and a receiver they just paid $100 million, he pulled the trigger knowing it would garner criticism. He then continued to shock the world. After Jones found out Lamb declared he would wear number 10, he called him over.

“I said in honor of my great friend, that just passed [last] year, we’re going to have his namesake come on here and wear old No. 88 like Michael and Dez and those guys and we got us a receiver,” Jerry Jones said. “And let me tell you one thing if he’s got the [competitive nature] and hearts of that Jerry Lamb, he’ll be bad to the bone.”

From here on out, it’s not about Cowboys’ wide receiver Amari Cooper and running back Ezekiel Elliot with those massive contracts. It’s not about offensive systems or coaching changes. The headlines for the next 10 years are going to read “CeeDee Lamb” and Jones will make sure of it.

If Lamb fails, that first-round capital and number 88 jersey will be a bigger hit to Jones’s persona than any contract or media-bashing he’s been through in his career. If this pick fails it could be catastrophic to the progress of this organization. Jones opted to sign Cooper to a massive contract while neglecting to extend quarterback Dak Prescott and retain the defense. Repeating the choice to draft a wide receiver in the first round instead of addressing those positions in the first round won’t help the situation. This will be personal for Jones and head coach Mike McCarthy knows it. There’s no getting your feet wet for this rookie; Lamb just has to jump right in to prove his value.

Going back and watching Lamb’s film to find potential utilization in McCarthy’s offense was enticing. Even when the Sooners didn’t line him up in the slot initially they typically motioned him there. This allowed him to find gaps and mismatches while gaining yards after the catch. This is similar to how Packers’ wide receiver Davante Adams was used in McCarthy’s offense in 2016 and 2017 when he totaled close to 2000 yards and 22 touchdowns. Lamb assuming this role in offense as a slot receiver is the likely outcome. Unfortunately, Adams wasn’t used in jet sweeps the same way Lamb was used in college which could be indicative of McCarthy’s reluctance to call those plays. However, Lamb having superior speed to Adams could change McCarthy’s ideas of usage.

The Cowboys losing slot receiver Randall Cobb to free agency opened up a huge opportunity, vacating 83 targets. Former Cowboys tight end Jason Witten is vacating 83 as well. While we are expecting current starting Cowboys’ tight end Blake Jarwin to assume a good portion of Witten’s targets, Jarwin still saw 41 himself, so I expect there to still be at least 40 or so of Witten’s targets to be up for grabs. Some are worried about the “too many mouths to feed” narrative, however, but that doesn’t have to be the case.  Per ESPN, in 2019 all three of Dallas wide receivers scored inside the top 31 receivers while playing full games together. That’s with Witten on the roster. There should be plenty of targets for all three wide receivers to be productive, especially with a declining defense which lost cornerback Byron Jones and edge rusher Robert Quinn. Running up the score on the Dallas defense means less run for Elliott and more work for Prescott and his receivers.

We talked about Lamb seizing the Cobb role so some of you might be wondering why I'm thinking this way after Cooper out produced him last year.  Let me break it down for you.  Cobb ran 404 passing routes while Cooper ran 458 so that comparison is already close for a receiver they signed for one year and had no invested interest. We already talked about the personal, emotional, and historical invested interest the Cowboys have in Lamb, not to mention the draft capital.  In addition, McCarthy loves his three receiver sets. Historically, he failed to produce top-end tight ends because he feeds the mismatch underneath routes to his slot guys when he was the head coach in Green Bay. Adams, along with James Jones, Ty Montgomery, and Cobb all had fantasy relevance even though they had their injury issues.

I am not typically a believer in rookie wide receivers because it takes time to adjust, but I’m just thinking about how excited McCarthy is right now. He has never had a first-round rookie wide receiver during his time as head coach of the Packers from 2006-2018. He’s only had six in the first three rounds of his tenure and only three this decade. He’s like a kid at Christmas and probably at his house drawing up plays as you read this.

With all this being said, I’m not predicting that Lamb is going to put up 1500 yards and 15 touchdowns. I'm predicting he's going to beat Cooper’s production. Cooper is going to command each team's top cornerback as you can see him getting smothered by Detroit Lions’ cornerback Darius Slay in the first GIF above. The coaching style should have no problem with this as it opens up the field for all other options like you’ll see in the second GIF.

Check out the corners Cooper has to face: Rams Jalen Ramsey; Seahawks Shaquill Griffin or Quinton Dunbar, the latter of which shut him down while playing with the Redskins last year; Browns Denzel Ward; Cardinals Patrick Peterson; Steelers Joe Haden who just had one of his best seasons; Ravens Marcus Peters; Bengals who just signed both Vikings Xavier Rhodes and Mackenzie Alexander; 49ers Richard Sherman; Eagles Darius Slay two times; not to mention, the Falcons did draft rookie AJ Terrell in the first round. Gallup gets the face-off against Sheffield who ranked the 13th worst out of 92 eligible corners, so the targets should be in heavy favor of Gallup pending Terrell’s ability to get up to speed.

Cooper struggled with elite corners last year having nine of his games fall outside the top 20 wide receivers. The Vikings, Packers, and Bears were three of four teams he faced when he finished as a WR1. Those team’s defensive schemes relied upon putting pressure on the quarterback. In games when they were rendered unable to do so, they were exposed. The Cowboys offensive line was able to hold them to six sacks through those three games, which is impressive since each one of these teams average over two or more sacks per game. Couple the offensive line's ability to provide time for Cooper to get open with the Cowboys throwing it 139 times in those games and you’d have to assume most wide receivers would have a great game. In other words: I’m not convinced that Cooper can beat the best corners in less than ideal situations.

I'm convinced Gallup is the guy to own over the next two years in this offense. He gained experienced as we watched him break out last year. If he played all 16 games at the same pace, Gallup would have finished only three points behind Cooper. He already has a rapport with Prescott and should see a very similar snap count to Cooper just as he did last year. He played in two fewer games and recorded three more snaps. He offers the big play ability and a far easier schedule in terms of matchups. I believe that the Cowboys are going to move on from Cooper so integrating and maintaining a role in this offense is going to be crucial to Gallup’s development. Gallup has to improve on those drops after leading the league last year with 11 however, I'm going to leave improving his hands up to the coaches. McCarthy knows a thing or two about developing receivers as we can tell from his days in Green Bay. Since 1942, 38% of the Packer's top 50 receivers were in his 13 years of being a head coach. That says a lot for what he's able to do for receivers on his offenses.

Assuming Lamb does play the slot, his toughest matchups are against the Ravens and the Steelers. Aside from that, I don’t see any real threats on the schedule. He should be funneled targets on a regular basis while the other two guys garner the most attention. Those defenses still have to worry about Elliott along with a developing tight end opening up the field for this young stud. Like I said earlier, I’m not a fan of rookie receivers, but Jerry Jones is going to make sure this guy eats.