Finding the needle in the haystack is equivalent to finding the tight end in the NFL draft, finding it is like finding gold. Tight end is a position in fantasy football often streamed week-to-week; if you miss out on a top tight end you likely find yourself in that situation. Here, we’ll find the edge to increase your probability of finding gold by examining quarterback play and the tight ends athletic profile.

The Christian McCaffrey's and Michael Thomas's of the world are few and far between but there remain feasible options from RB/WR2 (Aaron Jones/Chris Godwin) to the RB/WR20 finish (Devonta Freeman/John Brown), while the tight end does not have the same luxury. Tight end typically takes longer (Hensley, 2018)  to acclimate to the NFL compared to the running back and wide receiver.

Since 2000 there have been 13 tight ends who have surpassed 1,000 receiving yards for the season, a total of 31 seasons. Below are the tight ends with their respective NFL Draft position (no specific order): 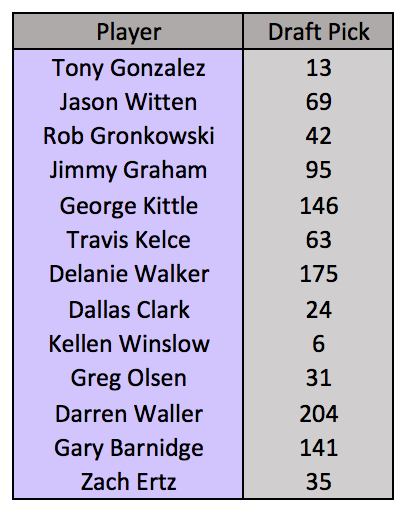 The average quarterback fantasy finish for a tight end that produced a 1,000-yard season was QB8.8 (see appendix 1a):

There were also eight tight ends who did not surpass 1,000 yards but still had 80+ receptions. Below are the tight ends and their respective draft position (no specific order): 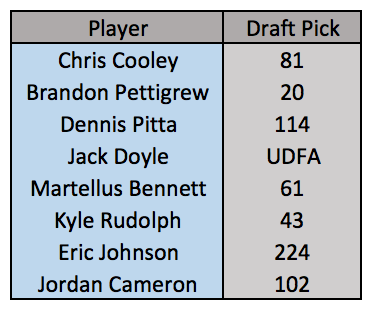 The average quarterback fantasy finish for a tight end that produced 80+ receptions was QB12.6 (see appendix 2a):

The average quarterback finishes were QB8.8 and QB12.6. The quarterback can only matter so much – the player still needs to have the athletic ability. The one glaring similarity amongst profiles is the 40 time, a sprint covering 40 yards (36.58 m). An evaluation on the acceleration and speed of a player.

Among the eight tight ends who recorded a minimum of 80 receptions: (see Appendix 2b)

Having to constantly worry about a starting line up position is stressful. Week in and week out making waiver wire transactions to ensure the best line up possible from lack of having top talent at the position. Having information to improve your chance at finding the next top tight end could be the most important information to have before your rookie draft. When evaluating tight ends it is important to understand the quarterback play and the tight end’s athletic profile. Since 2000 the tight ends that have surpassed 1,000 yards or 80+ receptions have been tight ends with a quarterback finish of QB8.8 and QB12.6 with 40 times that average 4.61 and 4.81.

It is important to note the limitations of this study. The study analyzed tight ends surpassing 1,000 yards and 80+ receptions. This study was done to analyze the top tight end finishes and not the average tight end finish.

The information in this study will be useful to owners who have an understanding of the team's schemes and the profile of the tight end position -- e.g., Austin Hooper and Mark Andrews were the two tight ends who fit the mold as screaming buys for the 2019 season. Going into the 2020 season those tight ends are: Dallas Goedert, Mike Gesicki, Noah Fant, T.J. Hockenson, and Irv Smith Jr.

The aforementioned point on how the tight end position typically takes longer to acclimate to the NFL could be a reason why tight ends are not often drafted in the first round of dynasty rookie drafts. Force your attention to rookie and sophomore veteran tight ends that fit the above criteria and make a trade before price discovery and find your gold. 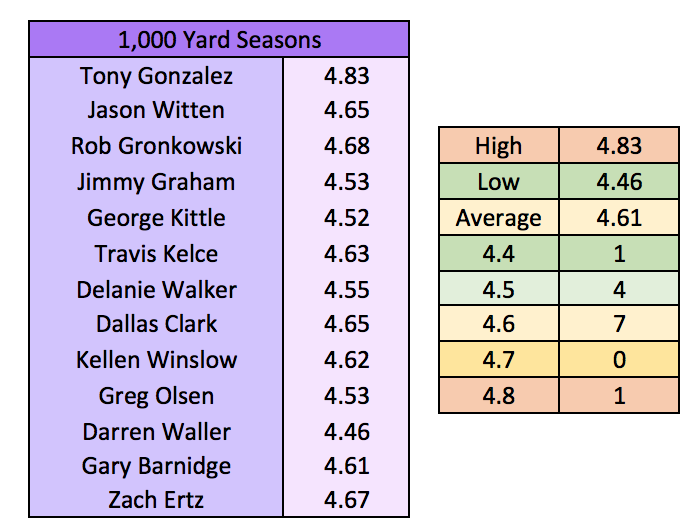