Too Early is the Perfect Time

The lower tiers of tight end has been a desolate wasteland since fantasy football came into existence. The volatility of the position constantly makes us pull our hair out, punch pillows, and throw things in frustration. Good NFL tight ends don’t always translate to fantasy points. When your tight end makes a great block and springs a running back for a touchdown, you don’t get points. When he shoulders the cornerback off the receiver on a rub route causing the receiver to be open for a touchdown, you don’t get points.

The position is one of the most tedious positions in fantasy to predict. Most would think they are touchdown or target premium dependent. While touchdowns and higher value targets do help raise the tight end’s ceiling, they are one of the hardest stats to predict being it’s so heavily based on play calling and situation. You don’t need to over-analyze tight ends. The real indicator of a tight end’s floor is similar to every other position: volume. This is true for a tight end more so than any other position.

11 of the 12 tight ends who finished as a tight end one also finished in the top 12 of targets, with Jared Cook being the exception. 10 out of the top 12 also saw at least a 15% target share, a total only 11 tight ends overall saw. So what makes their production so hard to predict?

Since 2016, we have seen five or more new tight ends work their way into TE1 production who weren’t there the previous year, scoring 10 or more points per game, assuming they played 16 games. Most recently, from 2019, there were seven new tight ends who finished as a TE1, scoring at least 8.5 points per game. Teams are using more multiple tight end sets where the inline tight end and the move tight end are both catching passes so we are seeing a decrease in points required to be a TE1.

We’ve seen teams deploy two tight ends before. We just haven’t seen multiple tight end personnel packages, where they are the ones being asked to catch passes, as prevalent as we see today. 27 of the 32 teams used multiple tight end sets at least 20% of the time. This offers much more opportunity for younger tight ends to get playing time as the move tight end where they will just be asked to catch passes on passing plays instead of having to know both the routes and blocking schemes. This should quicken their learning curve by seeing more snaps and as a result, this could create an earlier potential breakout in their career than what we are used to seeing.

We see the value spiking upward for players like Titans Jonnu Smith, Ravens Mark Andrews, Broncos Noah Fant, and Rams Tyler Higbee. When you end up with one of these guys prior to the spike in value, you're hitting fantasy gold. Last offseason you could get those guys mentioned for fractions of what it would cost you now. This offseason Andrews is being considered by many the second best dynasty tight end. Higbee went from waiver wire pick up to a top six option. Fant is the hottest new toy on the market. There’s one guy not being talked about enough who could be this year’s “Mark Andrews”; Irv Smith Jr., the soon to be 22-year-old Vikings tight end.

Smith was arguably the best tight end in the Nick Saban era, putting up more yards and touchdowns in a college season than former first round pick and Buccaneers tight end O.J. Howard. The impressive part about his production was he did it while sharing the field with wide receivers Jerry Jeudy, Henry Ruggs, Jaylen Waddle, and Devonta Smith. In 2018 he had one less reception than Waddle and two less than Ruggs while having more receptions than Smith. All this occurred while future NFL running backs Damien Harris and Josh Jacobs were commanding touches as well. Producing 710 yards and 7 touchdowns in a system which doesn’t feature tight ends along with the teammates he had to share targets with is not an easy feat to accomplish.

The Vikings saw Smith falling in the draft as a golden opportunity to groom their future star and took him in the second round. He didn’t disappoint, ranking third for rookie tight ends in fantasy points scored even while being the second tight end on his team. He also saw a smaller snap share than the two other rookies who finished ahead of him.

We can give partial credit of that to the Vikings offense, which shouldn’t change much after losing offensive coordinator Kevin Stefanski to the Browns. Current offensive coordinator Gary Kubiak was hired last year to be the offensive advisor/assistant head coach.  He’ll be assuming the playcalling responsibilities and announced we should see the same offense we witnessed in 2019. What does that mean for Smith?

Per Sharp Football the Vikings ran 11 personnel 18% of the time, which was the least of any team in the league. The only team even remotely close: the 49ers at 21%. All other teams were north of 30%. We shouldn’t see a change in that especially after losing Stefon Diggs. In addition, we saw two or more tight end sets on the field for at least 53% of the snaps. With rookie Justin Jefferson expected to assume the secondary receiver role, it’s likely they lean on three tight end sets more often, especially in the red zone. Smith only saw two red zone targets in the first eight games, however he saw eight in the second half. The coaching staff and Kirk Cousins's faith have grown in Smith as the season went on and it showed.

With the offense remaining similar to last year’s I have to wonder if Kubiak can open it up even more than Stefanski, being a more experienced play-caller. He’s known for unlocking the playbook and leaning on play action. Joe Flacco had one of his best fantasy seasons under Kubiak in Baltimore, and he was able to make tight ends like Crockett Gilmore, Owen Daniels, and Dennis Pitta somewhat fantasy relevant even while they were plagued by injuries. Following Kubiak’s final year as the offensive coordinator for the Broncos in 2002, the only tight end he coached that could be considered better than Smith in terms of college production and workout metrics was Pitta.

The biggest question still remains: how is Smith going to become fantasy relevant if the Vikings continue to run the ball while being the second tight end on the team? So looking at last season’s progression I found something pretty shocking. Five out of Rudolph’s top six weeks came in Weeks 7, 9, 10, 11, and 15.  Five of Smith's best six weeks came during those same weeks.  This shows both can be simultaneously relevant as long as the offense is moving and getting into the redzone.

The Vikings were top 10 in scoring percentages inside the red zone and hyper-efficient while throwing in goal line packages, attempting 4 passes for 3 touchdowns. With Kubiak calling the plays, we will see an increase in pass attempts while in scoring position. Cousins has 51 red zone attempts in 2019. Since Kubiak took over as head coach of the Texans in 2006 he has called plays in 11 different seasons. We have only seen him dip below 51 attempts two times in that span with 50 in 2012 and 49 in his first year as the head coach of the Texans. His average during that span: 72.8 red zone attempts per season.

So as we revisit what was established earlier, touchdowns have more to do with ceiling than with floor, we need to see volume. The loss of Diggs is vacating 93 targets. Jefferson being a rookie will most likely not assume them all considering Diggs was a polished and trusted star receiver. I’m not completely convinced that Adam Theilen won’t command the ones left over. Why is that a good thing? 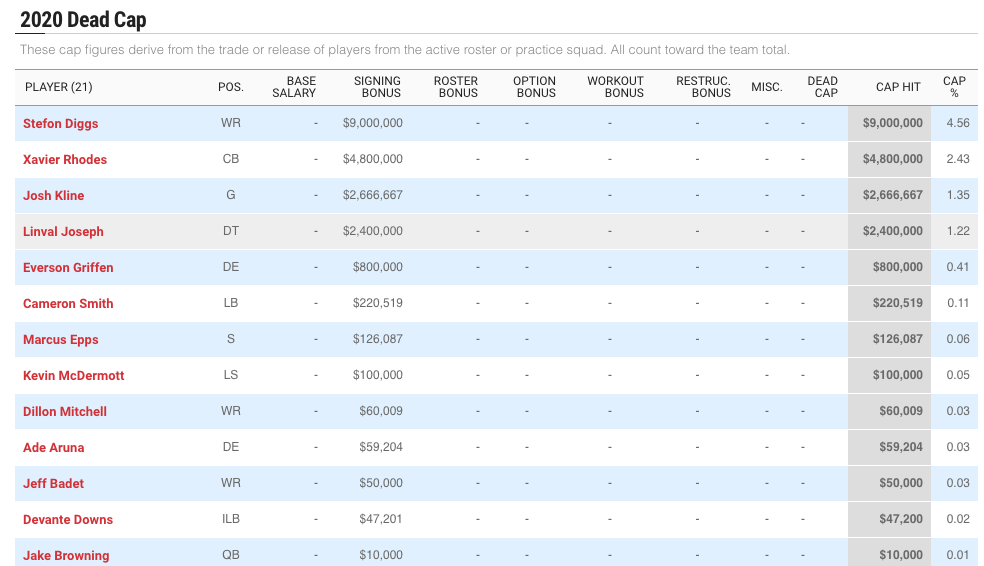 Theilen has shown some minor injury concerns while also turning 30 at the start of the season. The Vikings can move on from him and Rudolph in 2021 while saving over $16 million. They have shown no hesitation in letting guys walk and unloading contracts which you can see above, per Spotrac. There’s also the potential issue that the cap space won’t increase following this year with the issue of fans not being at the games. There should be enough extra targets to go around where Smith might be the guy to own next offseason.

We see the hype around Fant and he only got 18 targets more than Smith. Smith was better in yards of separation per target, contested catch rate, and red zone target share. The only area where Fant was superior to Smith outside of targets was yards after the catch, in which 166 of the 300 came in three plays as the result of poor tackling.

Smith is a lot closer to breaking out than most people realize and although it might not happen this year, 2021 is right around the corner. As Aaron Yakel of Dynasty Happy Hour said, “Isn’t too early actually the perfect time to buy in dynasty?”. For Irv Smith Jr, that time is now.