Defense can win championships; but taking them the first defense off the fantasy draft board probably won’t net you positive results. Going as far back as Fantasy Draft Calculator tracks the average draft position of defenses to 2013, the earliest the number one ranked defense was selected was eighth. It is the position which turns out the most “sleepers” every year.

Few people can predict which defense will be the top-ranked in points scored because there are so many moving pieces surrounding the defensive scoring. Is your offense good enough to constantly force shootouts? Do you have individual playmakers at fantasy-relevant positions such as edge rusher and defensive back? Is the philosophy of the defensive coordinator to cause turnovers or play it safe? Do the quarterbacks on the schedule turn the ball over? The biggest question I ask myself: Can I play them Week 1?

I typically don’t draft a defense. I prefer taking shots on other positions throughout training camp and the preseason, so I have a bigger chance of hitting on sleepers. A few days before Week 1 commences, I look across the matchups and usually go with the team who faces the worst quarterback who will throw 30 or more times. As long as the defense is feasible, I’m good to go. As the season rolls on and things start to get a little less hazy, I’ll begin to look for a more permanent team to fill the position. It doesn’t mean they should be completely ignored.

As I start my search for my defense of the future, I look for young impact players at impact positions such as Washington Football Team’s defensive end Chase Young or Cardinals hybrid linebacker Isaiah Simmons. The Football Team’s defensive line could be an absolute powerhouse for years to come with five first-round picks and one of the higher graded defensive lineman last year Matt Ioannidis, forcing teams to throw throughout the game. If the secondary can improve under new defensive coordinator Jack Del Rio, the football team could be an excellent sleeper for 2020 and beyond.

I am not, however, naming the Football Team as my defense to own in 2020. They have one major flaw: the lack of offensive scoring. Contrary to popular belief, you want your opponents to pass, and you want them to do it a lot. Over the past five years, 54% of the top 10 defenses were on a team with an offense which finished in the top third of the league in scoring. When a team is losing versus a superior attack, it forces them to drop back and throw, thus creating turnover and sack opportunities with potential defensive touchdowns. Teams like New England, New Orleans, San Francisco, Minnesota, and Kansas City are all perfect examples, and none were top ten for ADP in 2019. 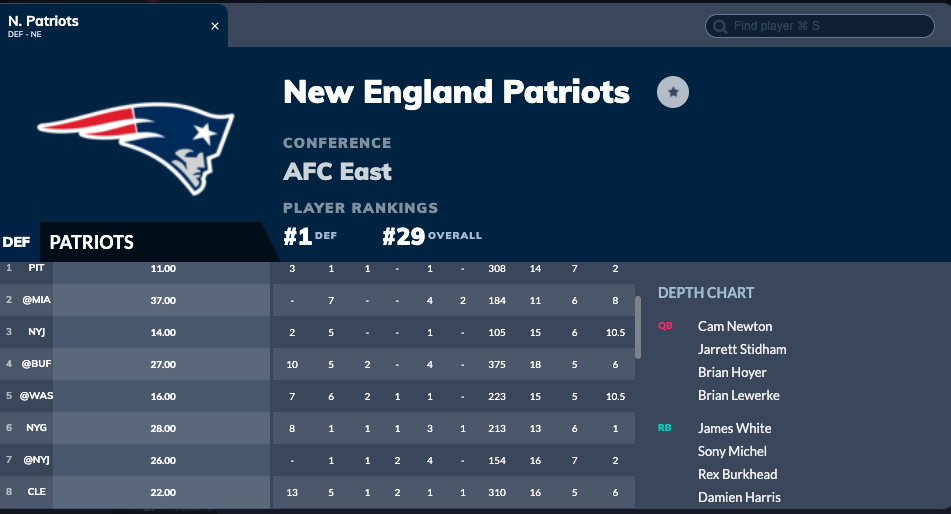 The last thing I’m checking out is the schedule. Many things can change in a season, especially looking forward to 2020. If there were ever a year to stream defenses, this would be the one. However, if I see a stretch of games like the Patriots from Weeks 2 through 8, I’m hopping on for the ride. When I check out the schedule I’m looking for teams with a quarterback who throws multiple interceptable passes (not to be confused with interceptions), teams with bad offensive lines or who lost offensive lineman without replacing them, high pace of play, running backs who don’t get a lot of breakaway runs or have overly efficient stats, and teams with bad defenses. The Bears, Jaguars, and Jets since trading safety (Jamal Adams) are perfect examples of teams I want to see on the schedule.

There’s one team who checks all the boxes without even a thought: The Indianapolis Colts.

Are they available late or post-draft and can you start them Week 1? 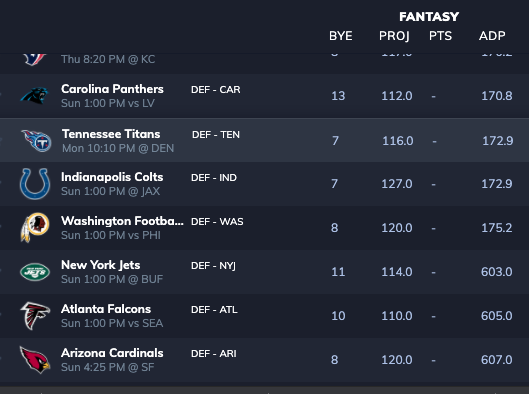 Absolutely. Sleeper has their ADP as the 28th defense off the board, so they are practically free. Week 1 is against the Jaguars, so you should be in good shape against a Gardner Minshew-led Jaguars. He was 10th in dangerous plays, and 14th in interceptable passes with the 23rd ranked protection rate while only playing in 14 games. There’s a chance the Colts have a field day.

Do they have young, dominant playmakers?

The Colts defense, now anchored by defensive tackle Deforest Buckner, is set up in a prime position to smash in 2020. Ball-hawking safety Malik Hooker, second-year corner Rock Ya-Sin, and Pro Bowl linebacker Darius Leonard are all cornerstones to this defense and under 24. If you add in the third-round draft pick safety Justin Blackmon and edge rusher Kemoko Turay - who notched 14 pressures in just 69 pass rushes before getting hurt - you are talking about some serious firepower for defensive scoring upside. Not to mention, they still have Justin Houston, who had 11 sacks last year on limited snaps. I’d say we can check the playmaker’s box.

Do they have a dynamic offense who can maintain the lead?

This is likely going to be the most significant question mark. Does quarterback Philip Rivers still have it, or are we going to see more of the 2019 version? The Chargers had mostly everything the Colts do now: similar receivers; good running backs; stable play-calling; solid offensive line play. The difference is head coach Frank Reich. He spent 2014 and 2015 as the offensive coordinator of the Chargers, arguably Rivers’s best two years. If he can dial back Rivers’s interceptions, I will expect big things from this Colts team.

Is the schedule advantageous?

Following Week 1 verse the Jaguars, you might have to bite the bullet against the Vikings. Following the Vikings; they get the Jets, the Bears, the Browns, and the Bengals in one of the juiciest stretches of any team all season. With a healthier roster and a significantly easier schedule this year, as opposed to 2019 when they finished at the 13th ranked defense, we could see them easily crack the top 10.

The issue with the Colts defense last year was their inability to keep teams out of the end zone. The only top 10 defense to allow more points per game was the Buccaneers. The run game wasn’t the issue as they allowed the second least amount of rushing touchdowns. Although they were tied for the fourth most interceptions per game, their major weakness was in the passing game. They allowed the 24th most passing touchdowns per game and also ranked 24th in percentage of explosive passing plays at 13%.

If this secondary can stop giving up big plays while still maintaining a decent rate of interceptions, the addition of Buckner can add to the sack totals and lead to a massive jump in fantasy. The Colts are an absolute lock for me to start the 2020 season, and they just might find a home on my roster long term if they can deliver.