Are You Holding: Tyler Lockett?

There are a lot of reasons why a dynasty general manager will hold on to a specific player. Most believe in their hearts that these players will someday become a stud. In reality, the hype train was all it ever was, just hype. I polled several fantasy general managers from MyFantasyLeague Superflex dynasty leagues and compiled a list of players that they just will not give up on. Some of the general managers say they have held onto players in the past because they thought eventually the player would turn into a stud. Others said they were stubborn to cut them because they had constantly defended their players talent. It is one thing to have room on your bench to stash those players, but it’s another thing to let them sit there and waste away. During this article series, we will dive deeper into these players and let you know if they are worthy of their roster spot or if they should have a first-class ticket to the waiver wire.

Tyler Lockett was a three-star wide receiver coming out of Tulsa, Oklahoma in 2011. He played for Kansas State and made an immediate impact. His freshman year he was named an All-American as a return specialist and the Big 12 Offensive Freshman of the Year. His sophomore year he was an honorable mention for All-Big 12 at both wide receiver and special teams. During his junior campaign he was named first team All-Big 12 and second-team All-American, in addition to breaking the school record for both receiving yards and all-purpose yards in a game. You can see the “hype train” getting started. In his senior season, he had over 1,500 receiving yards, was on the award watch-list for almost every offensive category and finished the year once again All-Big 12.

During the 2014 NFL Combine, he ran a 4.40 second 40-yard dash and was eventually selected in the third round by the Seahawks. So you have a fast and gifted wide receiver, who also has the ability to return kickoffs and punts. From the start of his career he looked like a dynamic play-maker, but let’s see what his numbers have said: 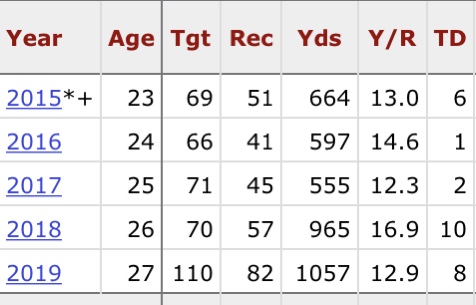 He had a great rookie season being named an All-Pro and earning a Pro Bowl selection. He remained very consistent his next two seasons. You can see he did not have less than 66 targets or fewer than 41 catches in his career, but he made a giant leap in 2018 with 965 receiving yards and ten touchdown catches. In 2019, he had his first 1,000-yard season and over 100 targets. Russell Wilson has been his quarterback since he entered the NFL, so nothing has changed from that perspective. Yet, something has clicked for him the past two years. He has established himself as the leading receiver on his team and even with the emergence of fellow wide receiver rookie DK Metcalf, Lockett had the most red zone looks and the largest target share on the team. He is currently ranked as the 18th ranked wide receiver on DynastyHappyHour.com and will be turning 28 years old this year. 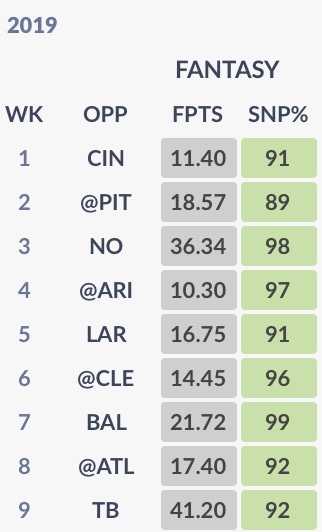 The first nine weeks of 2019 he was a solid fantasy player, but after their week 10 game against San Francisco he had a leg injury which initially looked to be severe and the reports were not good. It ended up being a deep contusion and he was able to play through it after two weeks off, but his production never recovered. Even with the injury, he has been getting better the past two seasons. He benefited from the 2018 retirement of Seahawks wide receiver Doug Baldwin and Lockett even said, “It’s time for me to be able to step up and try to fulfill the role that I’m called to be in.” He has shown he has the ability to lead the team in receiving and with Metcalf’s breakout it should allow Lockett to stop seeing the double team coverage and free him up to utilize his speed.

With all that being said, Lockett looks to be an absolute hold for the 2020 season! If you don’t have him and are a “win-now” dynasty team I would recommend trying to acquire him. Russell Wilson was an MVP candidate through the first half of this season and is showing no signs of slowing down. Lockett is currently signed through the 2021 season and if he can stay healthy, he has a shot at breaking into the top 15 for wide receivers next season.

Thanks so much for reading! You can follow me on Twitter @Clubber_Lang83 and go to DynastyHappyHour.com to check out my other articles and rankings.