I would describe looking at Packers Jordan Love’s situation as slightly more exciting than watching paint dry. I’ve covered Tua Tagovailoa, Joe Burrow, and Justin Herbert in this series. We go through coaching changes, organizational shifts in theory, and inconsistency at all levels. Now I go to a team which has been the model of stability for coaches, quarterbacks, front offices, and supporting talent. What am I supposed to talk about? Love will take over for current starter Aaron Rodgers within a few years on a run-heavy offense and be very good for the next 15 years. Case closed. Pay me now. I’m calling it a wrap.

I don’t think Dynasty Happy Hour editor Jacob Henry is going to let this effort slide, so let’s dive into it.

As I cracked the surface of what I thought to be a long and tiresome road, I started to notice some interesting things. First being, the Packers are incredibly skilled at drafting quarterbacks. In addition to Rodgers and Love, they have drafted former starting quarterbacks Mark Brunell, Aaron Brooks, and Matt Hasselback. They would have selected Brett Favre as well, but the Falcons snatched him one pick ahead. The following year they traded a first-round pick for him. Arguably their only bust at quarterback was their 2008 second-round pick Brian Brohm.

The more significant issue is how they surround their quarterbacks. Certain organizations have strict philosophies they stick to regardless of their situation:

With the Packers, it has always been to sit out free agency, at least until Brian Gutekunst took over as the general manager in 2018.

Gutekunst has been with the organization since 1998. He started as a scout, then was the director of college scouting and director of player personnel before taking over as the general manager. Many believed the Packers’ frugality had cost them multiple championships as they failed to surround two Hall of Fame talents at quarterback with surrounding pieces to win. Rodgers and Favre have only been to three Super Bowls over their careers combined. The first year didn’t offer much insight into Gutekunst’s break from previous regimes, but after a second consecutive losing season, it was clear Grutekunst was going to make a change. 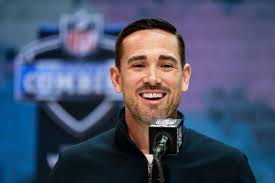 It started with firing head coach Mike McCarthy and replacing him with Matt LaFleur. Gutekunst followed this up with bringing in a slew of free agents and signing four of them to massive contracts. From 2011 to 2017, the Packers signed three players to contracts which took up at least three percent of the team’s cap space. In the three years since Gutekunst took over, he’s doubled this number. The stingy spending could be a thing of the past in Green Bay, which bodes well for Love. At this point, I’m actually getting excited to watch the work about to be done for the Cheeseheads up north.

There’s no denying Love has talent. The 6’3, 224-pound quarterback has shown excellent touch and ability to deliver the ball where only his guy can get it. At times he has thrown great arm strength, throwing beautiful deep balls. He has great mobility, running a 4.74 40, which could allow him to excel in the Packers' wide-zone-run scheme-based offense. All in all, he could be a tremendous physical fit for this offense.

The faults lie in his mental game, as we see him being over-aggressive and not making proper reads. However, decision making should be drilled into Love’s head after sitting behind Rodgers who only threw six interceptions over the past two seasons.

With this being a run-first offense, we can check out the offensive line first. The Packers offensive line is set, returning four of the five starters from 2019. Former Lion Ricky Wagner is replacing Brian Baluga, which shouldn’t alter things too much. The Packers should see a similar-looking offensive line for multiple years. As the line looks to remain a strength, Love should be well protected whenever he finally gets on the field.

The wide receivers are something Love would undoubtedly like to see improved, as the Packers ignored the position while addressing other areas. This offense only needs one dominant receiver, but for Love’s sake, I hope they address the position in either the draft or free agency in 2021.

A.J. Dillon is the future starting running back in Green Bay. Although very talented, current starting running back Aaron Jones doesn’t fit the system and will be looking for a new contract in 2021. Dillon and Love could set up a nasty combo in terms of play-action fake roll-outs, making it tough for defenses to stop.

The future wide receiver to be tethered to Love isn’t on the roster, so expect them to look into investing in one come 2021. His deep ball could mean bigtime fantasy weeks if they can find the right field stretcher.

Before starting the article, I wasn’t as optimistic. As I started my research, I couldn’t see how Love could fail, although I didn’t see a ton of fantasy points. If Gutekunst is willing to spend money, Love’s upside is through the roof. We’ve seen two great college years of production. Now we have to see if he can bring the same level of high-level production to the pros. If they surround him with talent, it should be a no brainer.

Love can be your guy.